This week, we are going to be inspired by the great Sir David Attenborough.

1) Read through this transcript of one of David Attenborough's voiceovers. Make some notes about what makes it effective.

The surface of the ocean conceals
the many creatures that live beneath
but not all.
Bottlenose dolphins.
They're extremely intelligent.
And with this intelligence
comes playfulness.
They surf.
And as far as we can tell,
they do so for the sheer joy of it.
But to properly appreciate
their true character,
you have to travel with them
into their world.
A pod of bottlenose dolphins is visiting
a coral reef in the Red Sea.
For the youngsters,
there are things to be learned here.
The adults lead a calf
to a particular bush-like coral
called a Gorgonian.
And here, the adults behave
rather strangely.
They deliberately rub themselves
through the fronds.
Their calf seems reluctant to do so.
By watching his elders,
he may be realising
that this is something he ought to do.
Gorgonia fronds, in fact,
are covered with a mucous
that can have anti-inflammatory
and antimicrobial properties.
So maybe the adult dolphins
are doing this
to protect themselves from infection.
The dolphins' intimate knowledge
of the reef
is spurring us to search
for new medicines here, too.

2) Look up the highlighted words in a dictionary or online to find their meaning.

3) Write a sentence which includes a relative clause to describe each of the animals below - remember a relative clause is a bit of 'extra information' that is separated by commas, dashes or brackets. E.g. The ferocious beast, which cleverly conceals itself in the African wilderness, waits patiently for its unsuspecting prey to separate themselves from their herds. 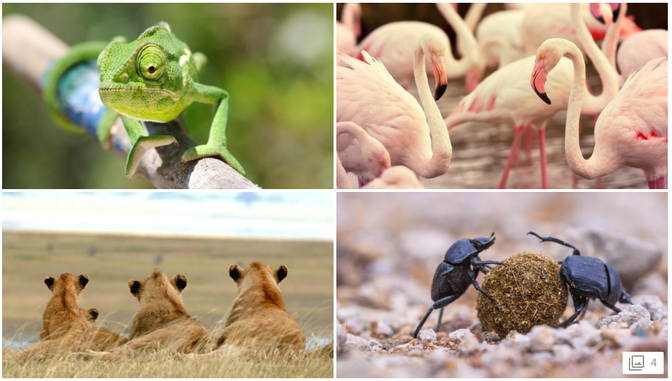 4) The video below is a compilation of lots of different animals in the African wilderness. Watch it and choose a few of the animals to write your own David Attenborough style voice-over about. You can also do some research about the animals so you can include some scientific facts in your voice-over script. If you are able to, you could even record yourself saying your voice-over!

Thank you to the children who have sent me the writing they have done based on the video - they have been great! Remember you can send me a picture of your writing or a word document via the email address given out on parent mail.

Answers to the synonym matching are as follows:

Eye of the Storm

1) Whilst watching the video above, think about the following questions:

Where is it set?

Why would he want to be heading towards a storm?

What do you think is in the wooden box? Why does he throw it away?

What do you think the key is for?

2) Match the synonyms (words that have the same meaning). You can use a dictionary if you are struggling: 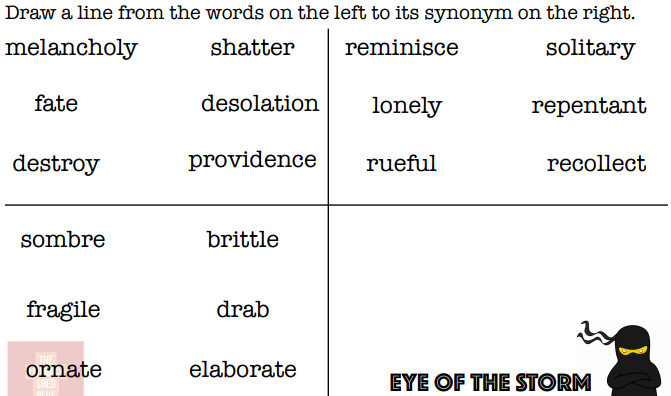 3) Read this story starter based on the Eye of the Storm. Plan the next section of the story using the video to help you. Use your imagination to try and include hints and clues to the reader as to who the man is, how he is feeling and what he is doing. 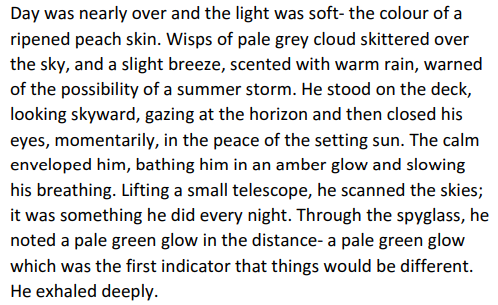 4) Have a go at writing the next section of the story. Here is some vocabulary and sentence starters which you could use to help you. You can either email me a picture of your story or type it on word and send it to me - I look forward to reading them! 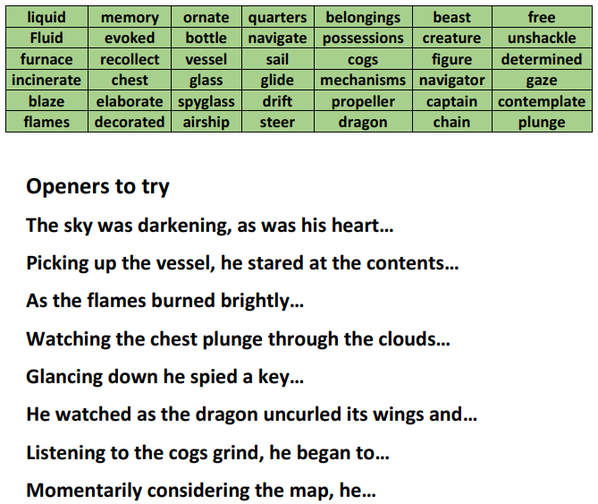